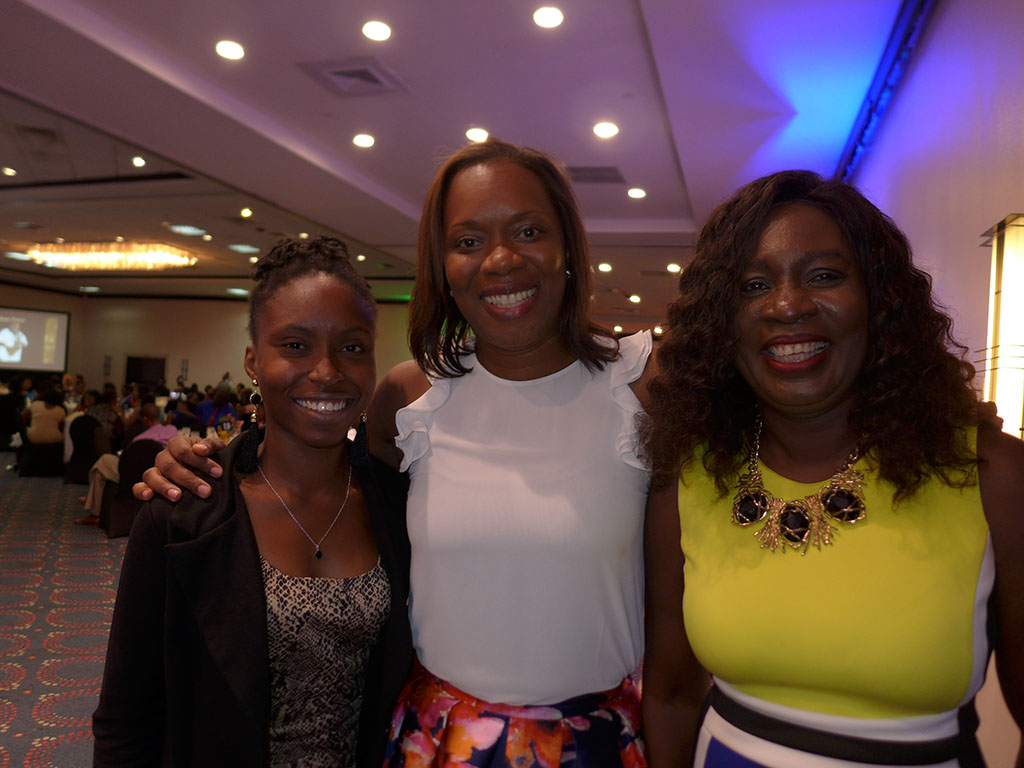 Sineal Smith (from left), a second year student in the Faculty of Law, at The University of the West Indies, Mona, share a hug with Alphie Mullings-Aiken, president, JAJ, and Delories Jones, senior vice president, sales and business development, JN Fund Managers.

Sineal Smith, a second year student in the Faculty of Law, at The University of the West Indies, Mona, credits her participation in the Junior Achievement Jamaica (JAJ) for having transformed her life.

General Secretary of the Jamaica Union of Tertiary Students, Ms. Smith says she gained financial literacy skills and the confidence to make presentations in formal settings, through the JAJ.   She was speaking at the JAJ’s annual awards banquet at the Jamaica Pegasus Hotel, St. Andrew, May 29.

“I obtained my very first summer job through JAJ,” she told the principals, teachers, sponsors and JAJ team members. “I should have been nervous and uncertain, but I was confident; I felt ready and excited to exercise what I had learned through the JACE programme.”

Students receive entrepreneurial, financial literacy and workforce readiness skills through the JAJ, while its Junior Achievement Company of Entrepreneurs (JACE) programme offers six-months of practical experience in the fundamentals of business operations, with support from private sector volunteers.

Born in Spanish Town, Sineal attended St. Jago High School, and, through the JACE programme, became  president  of  the  Young  Entrepreneurs Passion for Production t-shirt design company, established by the St. Jago students in 2013-14. She said that she appreciated the marketing, technical support, and the computer tablet given to her St. Jago team by JN Fund Managers, a member company of what became The Jamaica National Group, which assisted her school in the programme.

The former St. Jago High School head girl explained that, apart from reviving her savings habit, this exposure helped her as a candidate in the 2013 National Secondary Students’ Council’s elections, for the post of National Treasurer.

“I won and I credit Junior Achievement Jamaica, because it was my display of financial confidence which allowed me to stand out,” she related.

With marketing guidance from JN Fund Managers, her team at YEPP produced personalised t-shirts, based on customer requests and negotiated with different personalities to achieve their end goal.

That experience gained at St. Jago High School, backed up by advice from a mentor, gave her the confidence gave to take on the challenge of studying law.

“Now at the age of 21, I will be very honest in saying that, the JAJ, through these programmes, rescued me from a cycle of money mismanagement,” she stated. “Investments piqued my interest, because I liked that idea of making money work for me, as opposed to me working for it.”

One financial move she made recently was to start an account with JN Bank to show her appreciation for the role they played in her life previously.

“I became very loyal to JN Bank because they sponsored the programmes I participated in at St. Jago. That opportunity created my first meaningful interaction with the JN family.”

She reminded the appreciative audience that, “The Jamaican 2030 vision is for our country to be, ‘The place to live, work, raise families and do business‘.   “The JAJ, in my eyes, has been the leader in mobilising a key populace, youth, by ensuring that we gain the skills to engage in owning our own economic success, and help to boost the economic success of Jamaica.”